A whole skull of an old human progenitor was discovered in 2005 at the archaeological site of Dmanisi, a tiny town in southern Georgia, Europe. The skull belonged to a 1.85 million-year-old extinct hominid!

The archaeological specimen, known as Skull 5 or D4500, is completely whole and has a long face, huge teeth, and a small braincase. It was one of five ancient hominin skulls discovered in Dmanisi, forcing experts to reconsider the early human evolution scenario. 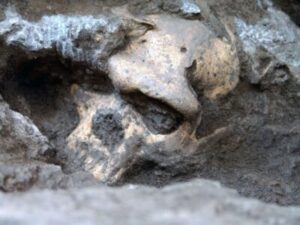 Dmanisi is a hamlet and archaeological site in Georgia’s Kvemo Kartli region, about 93 kilometers southwest of the country’s capital, Tbilisi, in the Mashavera river valley. The 1.8 million-year-old hominid site was discovered.

Many unique species in the genus Homo were thought to be a single lineage when a succession of skulls with diverse physical features were unearthed at Dmanisi in the early 2010s. Skull 5, also known as “D4500,” is the fifth skull unearthed in Dmanisi.

Until the 1980s, scientists considered that hominins were confined to Africa for the entire Early Pleistocene (until around 0.8 million years ago), only migrating out during a phase known as Out of Africa I. As a result, Africa received a disproportionate amount of archaeological attention.

However, the Dmanisi archeological site is the earliest hominin site outside of Africa, and artifact research revealed that certain hominins, primarily Homo erectus georgicus, departed Africa as early as 1.85 million years ago. The five skulls are all about the same age.

Though the majority of scientists believe the Skull 5 is a regular form of Homo erectus, the human predecessors who lived in Africa during the same period. While some have claimed it to be Australopithecus sediba, which lived some 1.9 million years ago in what is now South Africa and is thought to be the ancestor of the genus Homo, which includes contemporary humans.

Many scientists have offered numerous new possibilities, but we are still deprived of the genuine face of our history.